Kailash Kher, one of the best singers from India. I have been a fan of his songs last 2 years. I got chance to attend his recording on MTV as an audience. The Studio was in east area of Mumbai, nobody could notice there was a studio. The building seemed just a old building from outside. However, we were so surprised once we entered the studio. The perfect set was there.

The number of songs they recorded were only 6 songs but we were at studio for 10 hours. Clapping and tried to make good atmosphere for the TV show even before the main band came to the stage. 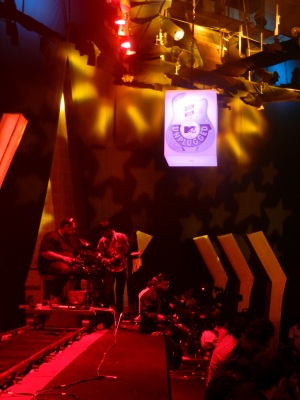 A camera man talked to me, he thought me and my friend from Japan were from Assam or somewhere northern India since he was originally from there. The atmosphere of the studio was so nice and I could feel their effort as professional.
Here is a new song by Kailish Kher which I really liked. The sound of instrument was just awesome and I could enough understand why Indian people are crazy about his music. I hope I can get another change to listen his song.