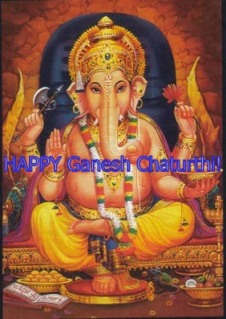 Big festival week has started in Maharashtra in India. Unfortunately,I missed it this time because of delay joining a company in Mumbai.

India has some festivals which is related with each religions. I only participated in Diwali which is taken in October. That was second visit to India for me in last October and I went to Pune to see my friend. I had not have any information about Diwali. My friend invited some neighbors and we had beer or snack in their room. After sunset, the sound of firecracker and fireworks started everywhere. We went out to see it. Everyone had bunch or firecracker and lighter on their hands and turned fire on it, threw it away. Even a little child like 4 or 5 years old had it and enjoyed to throw it in front of people. Really, the sounds were crazy and I could not hear what were they talking even from person next to me. It was like a war…I was scared because spark and smoke made me hard walk around. However, all people except me seemed enjoying that crazy situation and asked me to make fire. That was kept until late at night.

Now, people in Maharashtra may be celebrating Ganesh Festival. I hope that is less crazy than Diwali which I saw in Pune. Indian way to do something is always more than I expected…

Ganesha Chaturthi (Marathi: गणेश चतुर्थी, Tamil: விநாயகர் சதுர்த்தி Kannada: ಗಣೇಶ ಚತುರ್ಥೀ), also known asVinayaka Chaturthi is the Hindu festival of Ganesha also called Vinayagar in South India, the son of Shiva andParvati, who is believed to bestow his presence on earth for all his devotees in the duration of this festival. It is the day Shiva declared his elder son Ganesha as superior to all the gods. Ganesha is widely worshipped as the god of wisdom, prosperity and good fortune and traditionally invoked at the beginning of any new venture or at the start of travel.
The festival is observed in the Hindu calendar month of Bhaadrapada, starting on the shukla chaturthi (fourth day of the waxing moon period). The date usually falls between 20 August and 15 September. The festival lasts for 10 days, ending on Anant Chaturdashi (fourteenth day of the waxing moon period).
While celebrated all over India, it is most elaborate in western and southern India. Outside India, it is celebrated widely in Nepal and by Hindus in the United States, Canada and Fiji. *Wikipedia

A popular song from a bollywood “Delhi Belly”